My in-laws’ roof is pounded tin, painted rust-colored, rippled and folded where the panels connect. The rain of the north Georgia mountains swooshes and swats on it, tapping a rhythm that backs the wind’s high drone around the peaks and eaves of the roof. A storm sounds like popping corn – first pops tentative and irregular, then the squall of pops so rapid that it gets hard to distinguish among them, then slowing again, rap… rap rap… rap… rap… into silence.

Over the triple-peaked mountain visible across their property – stand on the wrap-around porch and look down the slope of the lawn, past the split rail fence and gravel drive, across the pond, then beyond the neighbor’s orchards and the expanse of land after the town road to the mountain, whose very base is just about visible in the winter – the changing clouds tell the story of the verdure of this slice of the country as they bring wetness in all its forms. Giant black thunder-heads in the summer, the high, light gray of a steady spring rain, the dark enveloping gray of a winter storm, the humps of the peaks disappearing one by one in the lowering mist, the world obscured.

Cocks crow nearby. Cattle bellow over at another farm. A coyote once peeked in slyly through the low windows of the former back porch converted into an art studio where my mother-in-law paints. The dog can’t be let out alone at night. Life is everywhere. 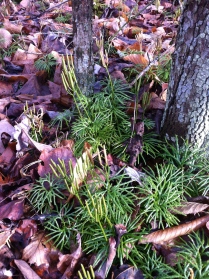 Just after Christmas, an old friend of my wife came up from Atlanta to see us, and we took a walk on a path that my father-in-law cut. He has created shrines along that path, little places of memory and reflection placed every so often to remind him of people and moments past and present. His children and grandchildren are in those places. Friends abound. Rocks and plants are placed just so, and there are several bird houses. My in-laws are great lovers of bird houses. Everywhere there is life. Small birds flit from branch to branch, twittering. A hawk or falcon – the glare of the sun and my eyesight conspire to rob me of any chance of identification – banks over the orchard. Farther away, several turkey vultures circle, keen observers of impending death. I turn away from them, back to the explosion of life nearer at hand. Soft, furry moss spreads over hummocks of reddish earth. Some sort of clubmoss with little trident-shaped sprouts bobs and nods in Seussian style, with contrasting dark vinca nestled underneath and all around. Grasses sprout in tufts. Trees are everywhere, and rhododendrons provide pockets of shade.

Where there is so much life, there must be water, and indeed a creek winds through, flowing and trickling down the hillside and underneath wooden bridges greened slick by moss. Scaly, grey-green nets of lichen give texture to tree trunks and stones. The air smells wet and like old plants leaving life behind and new ones gaining strength. Wet stone throws off mineral scents and I wonder if that’s what wine lovers are referring to when they use the term “mineral” in their tasting notes. If you looked at the creek water under a microscope, you would see a whole living, respiring world that is no less busy and alive and simultaneously symbiotic and competitive than the visible one all along the path. Everywhere are birth and death and the in-between thing that we hang on to as long as we can.

I walk the path along the creek, the water burbling softly. Here and there, the water disappears for a few meters below ground, then springs back into the open to sing and shimmer again. It has carved a small canyon for itself, and the path follows the ridge above. Past the wooden bridge that connects the path on this side with the portion on the other, and past one more shrine – this one has the look of a small labyrinth in stones, and the way some are sinking into the soft earth makes it look ancient and mysterious – the path terminates at an ordinary wire fence. The property line, abrupt and angular. The creek bed winds beyond, but the wild woods quickly peter out. There is a house with a regular lawn, then a few buildings and the old highway leading into town. I stand at the fence and follow the small gash of the creek bed with my eyes. I can’t see where it runs past the buildings. The land rises on the other side of the highway, and I guess that somewhere up there is the origin of the creek. I want to see it, the spot where water perhaps flows right out of the earth itself and starts something that goes on to nourish so much life down below. 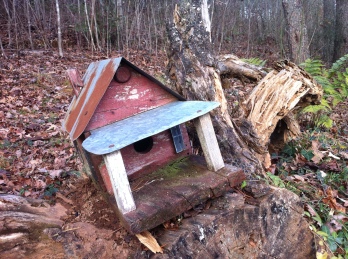 I go back to the bridge and cross it to the path on the other side. More moss and trees, more memorials, more birdhouses. Some copper and tin figurines, variously tarnished bright green and rust red. I come out of the woods, and the vultures are gone from the sky. I think that if I were to walk into the orchard or a bit beyond, I would find them at their meal.